The Legend of Kaldi and His Possessed Goats 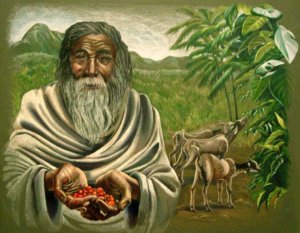 Although a majority of coffee today comes from South America, the origin of the treasured coffee plant actually originated in Ethiopia, formerly called Abyssinia. It was here in the 11th century that we meet the humble goat herder from Kaffa, who is credited by many to have discovered the coffee plant.  An excerpt from the book, “Uncommon Grounds: The History of Coffee and How it Transformed Our World” tells the story in fun detail:

“An Ethiopian goatherd named Kaldi, a poet by nature, loved following the wandering paths made by his goats as they combed the mountainsides for food. The job required little of him, so he was free to make up songs and to play his pipe. In the late afternoon, when he blew a special, piercing note, his goats scampered from their browsing in the forest to follow him back home.

One afternoon, however, the goats did not come. Kaldi blew his pipe again, fiercely. Still no goats. Puzzled, the boy climbed higher, listening for them. He finally heard bleating in the distance.

Running around the corner of a narrow trail, Kaldi suddenly came upon the goats. Under the thick rain forest canopy, which allowed the sun to sift through in sudden bright splotches, the goat were running about, butting one another, dancing on their hind legs, and bleating excitedly. The boy stood gaping at them. They must be bewitched, he thought.

As he watched, one goat after another chewed off the glossy green leaves and red berries of a tree he had never seen before. It must be the trees that had maddened his goats. Was it a poison? Would they all die? His father would kill him!

The goats refused to come home with him until hours later, but they did not die. The next day they ran straight back to the same grove and repeated the performance. This time Kaldi decided it was safe for him to join them. First he chewed on a few leaves. They tasted bitter. As he chewed them, however, he experienced a slow tingle, moving from his tongue down to his gut, and expanding to his entire body. Next he tried the berries. The fruit was mildly sweet, and the seeds that popped out were covered with a thick, tasty mucilage. Finally he chewed the seeds themselves. And popped another berry in his mouth.

Soon, according to the legend, Kaldi was frisking with his goats. Poetry and song spilled out of him. He felt that he would never be tired or grouchy again. Kaldi told his father about the magical trees, the word spread, and soon coffee became an integral part of the Ethiopian culture.”

This is a fanciful origin story to coffee. It would be a long time before roasting and grinding the seeds of these berries would become common practice. However, isn’t it reassuring that people were just as obsessed with coffee in the beginning as we are now? Every time I head that story I am curious as to what eating a whole coffee berry tastes like… If you want to try it out come get  a taste of our Cascara Soda! Cascara is a dried coffee berry that can be brewed into a tea and turned into a syrup. My Cascara Soda is this syrup mixed with soda water and it is most definitely my favorite thing I have tried in a while. Very refreshing!